← more from
577 Records
Get fresh music recommendations delivered to your inbox every Friday.
We've updated our Terms of Use. You can review the changes here. 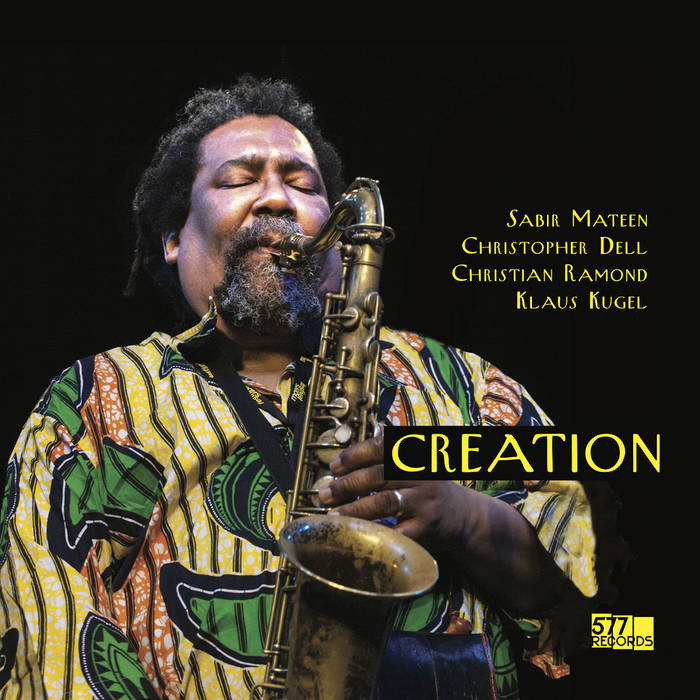 FACTS FIRST: CREATION presents one 47-minute, fully improvised 2012 live performance from Berlin, featuring three Germans and one New Yorker. The Germans are drummer Klaus Kugel, bassist Christian Ramond, and vibraphonist Christopher Dell. Kugel and Ramond have been frequent bandmates since the late ‘80s, currently with clarinetists Michel Pilz and Theo Jörgensmann. A beat is optional in this sort of free jazz, but momentum is a requirement, ands Kugel and Ramond, thinking in tandem, are expert at supplying it. I was unfamiliar with Dell before hearing him on Creation, for which I bear blame as a typically geocentric American, because he provides such color and contrast here, both in his solos and his backgrounds, that he’s now among my very favorite vibists,  along with Chicagoian Jason Adasiewicz. The wildcard is the sub-underground shock tenorist Sabir Mateen, who continues to be a mystery man in whatever scene he finds himself. Prepare to be blown away by him—as close as possible to literally.
- Francis Davis, July 2020

577 Records is an independent record label
based in Brooklyn, New York
operating since 2001

Sabir Mateen is a musician and composer from Philadelphia who plays primarily in the avant-garde jazz idiom. He plays tenor and alto saxophone, B♭ and alto clarinet, and flute.

He has performed or recorded with many legendary musicians including Cecil Taylor. He is a member of the band TEST, with Daniel Carter. ... more

Bandcamp Daily  your guide to the world of Bandcamp